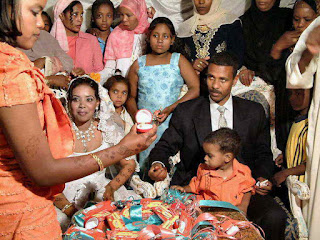 Nubians are an ethnolinguistic group indigenous to present-day Sudan and southern Egypt who originate from the early inhabitants of the central Nile valley, believed to be one of the earliest cradles of civilisation.

Nubian people have an ancient history predating dynastic Egypt. They speak the Nubian languages, which belong to the Nilo-Saharan language family.

In the pre-dynastic period, early Neolithic settlements have been found in the central Nubian region dating back to 7000 BCE, with Wadi Halfa believed to be the oldest settlement in the central Nile valley.During the dynastic period, parts of Nubia such as Ta-Seti,the first nome or administrative region of ancient Egypt were continuously a part of ancient Egypt throughout the dynastic era.

Other parts of Nubia, particularly Southern or Upper Nubia, were at times a part of ancient Pharaonic Egypt and at other times a rival state representing parts of the Empire of Meroe or the Kushite Kingdom. However, at the Twenty-fifth Dynasty of Egypt, all of Nubia was united with ancient Egypt, or Kemet, extending down to modern day Khartoum.

Towards the end of the dynastic era, Upper Nubia broke off from Egypt proper. During that time, the Nubians founded a dynasty that ruled Upper and Lower Egypt during the 8th century BCE. As warriors, the ancient Nubians were famous for their skill and precision with the bow.

Today, people of Nubian descent primarily live in southern Egypt, especially in the Aswan area, and in northern Sudan, particularly in the region between the city of Wadi Halfa on the Egyptian-Sudanese border and Al Dabbah. Additionally, several groups known as the Hill Nubians live in the northern Nuba Mountains in South Kordofan state, Sudan.

The main Nubian groups from north to south are the Halfaweyen, Sikut, Mahas and Dongola.

The term Nubia means gold or Nubians was first used by the Romans to describe the area of Southern Egypt and Northern Sudan.However, throughout history various parts of Nubia were known by different names, including Ta-Seti, Kush, Meroe, and biblical Ethiopia.Although Egypt and Nubia have a shared pre-dynastic and pharaonic history, the two histories diverge with the fall of Ancient Egypt and the conquest of Egypt by Alexander the Great in 332BC.

At this point, the area of land between the 1st and the 6th cataract of the Nile became known as Nubia. Egypt was conquered first by the Greeks and then the Romans. During this time period, however, the Kushites formed the kingdom of Meroe, which was ruled by a series of legendary Candaces or Queens.

Mythically, the Candace of Meroe was able to intimidate Alexander the Great into retreat with a great army of elephants, while historically documents suggest that the Nubian's defeated the Roman Emperor Augustus Caesar, resulting in a favorable peace treaty for Meroe.The kingdom of Meroe also defeated the Persians, and later Christian Nubia defeated the invading Arab armies on three different occasions resulting in the 600 year peace treaty of Baqt, the longest lasting treaty in history.

The fall of the kingdom of Christian Nubia occurred in the early 1500s resulting in full Islamization and reunification with Egypt under the Ottoman Empire, the Muhammad Ali dynasty, and British colonial rule. After the 1956 independence of Sudan from Egypt, Nubia and the Nubian people became divided between Southern Egypt and Northern Sudan.

Modern Nubians speak the Nubian language, an Eastern Sudanic language that is part of the Nilo-Saharan phylum.

The Old Nubian language is attested from the 8th century, and is the oldest recorded language of Africa outside of the Afro-Asiatic group. It was the language of the Noba nomads who occupied the Nile between the First and Third Cataracts and also of the Makorae nomads who occupied the land between the Third and Fourth Cataracts, following the collapse of the Kingdom of Kush sometime in the 4th century AD.

The Makorae were a separate tribe who eventually conquered or inherited the lands of the Noba: they established a Byzantine-influenced state called the Kingdom of Makuria, which administered the Noba lands separately as the eparchy of Nobadia. Nobadia was converted to Miaphysitism by the Orthodox priest Julian and Bishop Longinus of Constantinople, and thereafter received its bishops from the Pope of Alexandria.

The origin of the name Nubia or Nubian is still in contest. Many believe it is based on the ancient Egyptian noun, nebu, meaning gold. Another etymology claims that it originates with the name of a distinct group of people, the Noubai, living in the area that would become known as Nubia. Others refer to Nubians as Kushites, a reference to the Kush, the territory known as Nubia as it was called by Ancient Egyptians.

Though it appears the people of Kush did not speak what is today considered the Nubian language, they are referred to as Nubians since they inhabited the area known as Nubia.

In addition, mystery still surrounds the native language of Kush with some scholars believing the Kushites spoke an Afro-Asiatic language, which would make it rather distinct from the Nilo-Saharan Nubian language.Finally, some believe the term Nubian may originate with the Greek historian Strabo, who referred to the Nubas people.

The earliest history of ancient Nubia comes from the Paleolithic Era of 300,000 years ago. By around 6000 BCE, the Nubians had developed an agricultural economy. The Nubians began using a system of writing relatively late in their history, when they adopted the Egyptian system.

Ancient Nubian history is categorized according to the following periods:

Finally, there was the fertile pastoral region of the south, where Nubia's larger agricultural communities were located.

Nubia was dominated by kings from clans that controlled the gold mines. Trade in exotic goods from other parts of Africa (ivory, animal skins) passed to Egypt through Nubia.

The descendants of the ancient Nubians still inhabit the general area of what was ancient Nubia. Today, they live in what is called the former Old Nubia, which is mainly in modern Egypt. Nubians have been resettled in large numbers,an estimated 50,000 people away from southern Egypt since the 1960s, when the Aswan High Dam was built on the Nile, flooding ancestral lands.

Some resettled Nubians continue working as farmers on resettlement farms whose landowners live elsewhere; most work in Egypt's cities. Whereas Arabic was once only learned by Nubian men who travelled for work, it is increasingly being learned by Nubian women who have access to school, radio and television. Nubian women are working outside the home in increasing numbers.

In the 1973 Arab–Israeli War Egypt employed Nubian people as codetalkers.

Nubians have developed a common identity, which has been celebrated in poetry, novels, music and storytelling.

Nubians in modern Sudan include the Danaqla around Dongola Reach, the Mahas from the Third Cataract to Wadi Halfa, and the Sikurta around Aswan. These Nubians write using their own script. They also practice scarification: Mahas men and women have three scars on each cheek, while the Danaqla wear these scars on their temples.

Now younger generations appear to be abandoning this custom.

Nubia's ancient cultural development was influenced by its geography. It is sometimes divided into Upper Nubia and Lower Nubia. Upper Nubia was where the ancient Kingdom of Napata,the Kush was located. Lower Nubia has been called the corridor to Africa, where there was contact and cultural exchange between Nubians, Egyptians, Greeks, Assyrians, Romans, and Arabs.

Lower Nubia was also where the Kingdom of Meroe flourished. The languages spoken by modern Nubians are based on ancient Sudanic dialects. From north to south, they are: Kenuz, Fadicha (Matoki), Sukkot, Mahas, Danagla.

Kerma, Nepata and Meroe were Nubia's largest population centres. The rich agricultural lands of Nubia supported these cities. Ancient Egyptian rulers sought control of Nubia's wealth, including gold, and the important trade routes within its territories.Nubia's trade links with Egypt led to Egypt's domination over Nubia during the New Kingdom period.

The emergence of the Kingdom of Meroe in the 8th century BCE led to Egypt being under the control of Nubian rulers for a century, although they preserved many Egyptian cultural traditions.Nubian kings were considered pious scholars and patrons of the arts, copying ancient Egyptian texts and even restoring some Egyptian cultural practices.

After this, Egypt's influence declined greatly. Meroe became the centre of power for Nubia and cultural links with sub-Saharan Africa gained greater influence.

Ancient Nepata was an important religious centre in Nubia. It was the location of Gebel Barkal, a massive sandstone hill resembling a rearing cobra in the eyes of the ancient inhabitants. Egyptian priests declared it to be the home of the ancient deity Amun, further enhancing Nepata as an ancient religious site.

This was the case for both Egyptians and Nubians. Egyptian and Nubian deities alike were worshipped in Nubia for 2500 years, even while Nubia was under the control of the New Kingdom of Egypt.Nubian kings and queens were buried near Gebel Barkal, in pyramids as the Egyptian pharaohs were. Nubian pyramids were built at Gebel Barkal, at Nuri,across the Nile from Gebel Barkal, at El Kerru, and at Merroe, south of Gebel Barkal.

Modern Nubian architecture in Sudan is distinctive, and typically features a large courtyard surrounded by a high wall. A large, ornately decorated gate, preferably facing the Nile, dominates the property. Brightly colored stucco is often decorated with symbols connected with the family inside, or popular motifs such as geometric patterns, palm trees, or the evil eye that wards away bad luck.

In fact, the North African component of the modern Nubian gene pool is believed to pre-date the Arab migration into North Africa, extending back to the proto-berber (North African) inhabitants of Ancient Lower Egypt.Unlike the rest of Egypt, the region known as Nubia defeated or withstood invasions from the Greeks, Romans, Persians, and Arabs, resulting in preservation of the indigenous population.

In addition, Nubian society is known for being insular and disapproving of intermarriage with non-Nubian Egyptians/Sudanese, which historically also limited mixing.

Importantly, the Nubians are not to be confused with the Nubi people also sometimes referred to as Nubians, estimated at 100,000-200,000, who live in Kenya and Uganda. The Nubi are descendants of soldiers conscripted by the British during the colonial era, and they are originally from modern day South Sudan and the Darfur region.In contrast, the Nubians are indigenous to only Egypt & Northern Sudan.

- Alara of Nubia, founder of the Twenty-fifth dynasty of Egypt

- Taharqa, Pharaoh of the Twenty-fifth dynasty

- Amanitore, Kandake (queen) of the Kingdom of Kush centered on Meroe

- Mohammed Wardi, Sudanese Nubian singer, considered as the greatest Sudanese artist to have ever lived.

- Ibrahim Ahmad, Prominent Sudanese politician, first Sudanese head of the University of Khartoum, first Secretary of Treasury, the first chairman of the Bank of Sudan, co-founder of Umma party, Author and negotiator of the Sudanese Declaration of Independence.

- Jamal Abu Seif, Founder of Itihad, the first politically active group in the Sudan and predecessor of the White Flag League