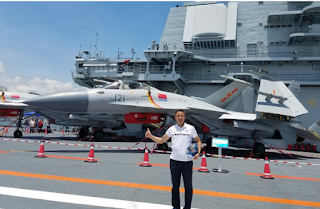 The high-profile purchase of an opulent home on The Peak in 1998 by a Hong Kong-based businessman was cover for the purchase of what would become China’s first aircraft carrier, the buyer said.

Xu Zengping, 65, the People’s Liberation Army Navy proxy who bought the unfinished carrier from a Ukrainian shipyard, said the purchase of the HK$220 million (US$28.1 million) luxury home in 1998 was aimed at convincing the outside world that he had the financial capability to turn the 300-metre Varyag into a floating casino. It instead became China’s first aircraft carrier, the Liaoning, which was commissioned in 2012.

Explaining his reason for buying the 22,000 sq ft luxury villa for the first time to non-mainland media, Xu said he was responding to recent accusations circulated on social media that he had “embezzled carrier deal money” to buy it.

Now everyone knows the floating casino is also a cover behind the stealth operation, and it’s not my personal behaviour, but for my country, he said. But in the very beginning, I needed to try every means to let the outside world believe the deal was just a pure personal investment.
He said the United States and other Western countries had tried to interfere in the carrier deal by investigating his background.

The Kuznetsov-class carrier was intended to be the pearl of the Soviet naval fleet when construction began in 1985, but in the aftermath of the Soviet Union’s collapse in 1991, the Ukrainian shipbuilder needed to sell it for US$20 million to help dig itself out of dire financial straits.

However, Xu, a PLA basketball player-turned-businessman, had only about HK$30 million in cash when he received the mission to buy it in 1997.
“The most simple way was to buy the most luxurious home in the city because Western countries didn’t believe Beijing would give me money to buy a villa,” he said.

The deal, done in the aftermath of Asian financial crisis, propelled Xu onto the covers of Hong Kong magazines. He sold it in 1999, a little over a year later.

In order to pay for it, Xu said he sold an 80 per cent stake in his company, Agencia Turistica e Diversoes Chong Lot, to a subsidiary of state-owned Central China Securities for 230 million yuan (roughly US$27.7 million at the time), but says he is still owed another 150 million yuan to this day.

All the transfers were done in an accounting firm in Beijing, not in Hong Kong or Macau, because we couldn’t let the outside world know there was a state-owned company involved in the deal, he said.

Central China Securities senior executives involved in the deal could not be reached for comment.

In order to clinch the deal, Xu and his team also claimed the vessel’s power generation system had been removed at the Nikolayev South Shipyard on Ukraine’s Black Sea coast along with its electronics and weaponry before it went under the hammer.

A video footage broadcast by China Central Television in November showed the Liaoning is using the original, Russian-designed propulsion system.
The villa deal, and the engine removal were all cover stories to confuse the Western countries and our competitors who were interested in buying the carrier, Xu said.

Today, President Xi Jinping supports developing aircraft carriers, but in the 1990s, then president Jiang Zemin was strongly opposed to us buying the Varyag carrier, Xu said, adding that all the people taking part in the deal had taken on great political risk.

But Jiang changed his mind in the aftermath of the bombing of the Chinese embassy in Belgrade on May 7, 1999, by a US aircraft during the Nato air war over Yugoslavia, which killed three Chinese journalists and ignited massive anti-American protests on the mainland.

That led to Beijing becoming directly involved in the latter stages of the carrier deal.

It took two years to tug the giant ship from the Black Sea to Dalian, in Liaoning, where it arrived on March 2, 2002. Refitting work started at 2005 after state-owned steelmakers figured out how to make the special steel needed.

After seven years of refurbishing, the carrier, renamed the Liaoning, was formally delivered to the PLA in September 2012.

Despite being one of the key contributors to the carrier deal, Xu, did not board the Liaoning when it visited Hong Kong and was opened to the public for the first time last month to mark the 20th anniversary of the city’s return to Chinese sovereignty.

I was invited by the Chinese navy to board the carrier several times after it was put into service, Xu said. I got seven tickets from the navy, and I distributed them to the people in Hong Kong who also made contributions to the carrier deal.

Xu said one of them was his former personal aide, Perry Yiu Pak-leung, now a Kwun Tong District Council member.

I was deeply touched by Perry after he sent me a picture showing him standing and smiling on the deck, Xu said. He took a picture on the same ship almost 20 years ago. But there is a big contrast in the background behind him today and yesterday.

Yiu said that he had been one of the witnesses to the carrier deal when accompanying Xu to Ukraine between 1998 and 1999.

I asked Mr Xu to get the ticket because I wanted to revisit the carrier again, especially as it was visiting Hong Kong, my home, Yiu said. It’s become a new ship, so different from the one I boarded at dockside on the Black Sea in 1998.