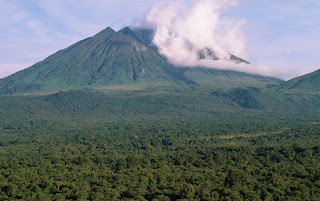 The Virungas are a chain of eight volcanoes which dot the borders of Uganda, the Democratic Republic of the Congo and Rwanda.

The name means guide, and the Batwa used to look for its high peak to help orient them in the forest.

Muhavura volcano also called Volcan Muhabura is an extinct volcano at the easternmost end of the Virunga Mountains in east central Africa.

It lies northeast of Lake Kivu on the border between Uganda and Rwanda.

It is a relatively youthful stratovolcano with a small 40-m-wide lake in its summit crater.

The 3474-m-high Gahinga (Mgahinga) volcano is joined to Muhavura on the west by a broad saddle.

A small parasitic crater has been recently active, but the age of the latest eruption of Muhavura is not known.

It has a crystal clear crater lake about 36m wide at its summit.

The top commands panoramic views far into Uganda, Rwanda and along the length of the Virunga chain.

Mount Gahinga (3,474m) is the smallest of the Virunga volcanoes.

It is named after the local practice of tidying the volcanic debris that clutters local farmland into neat cairns – or Gahinga. Its swamp-filled crater is around 180m wide.

It lies northeast of Lake Kivu and south-southeast of Rutshuru, Congo (Kinshasa).

Its summit marks the junction of the Congo (Kinshasa)–Rwanda–Uganda borders. It forms part of the Virunga National Park, which is the home of the mountain gorilla.

Sabinyo which also means old man’s teeth is a reference to its jagged summit which is dissected by deep gorges and ravines.

The countries that share the Virungas – Uganda, Rwanda and the DR Congo – meet on the highest of Sabinyo’s stumpy peaks.

This volcano offers 3 challenging peaks to climb. A climb up the mountain takes one up a ridge along the eastern side of the climb peak 1.

If you are to continue, the climb peak 11 involves walking as ridge with breath- taking drops into gorges of Rwanda and Uganda.

Finally, the hike up to the peak 11 is steep with several ladders and mush scrambling.

You are guaranteed to get your hands dirty en-route to peak 111.

Once on top, you will be in Rwanda, DRC and Uganda at the same time. The journey takes about 8hrs round to cover the 14km stretch.