Shisha Smoking Is Harmful To Your Health 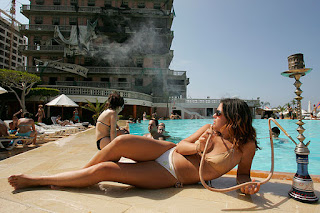 Smoking shisha has become a trendy pursuit among young people today. Many young adults gather in shisha cafes and share the pipe between friends.

They see smoking shisha as a pleasant and relaxing experience and according to a recent study as many as 44% of them believe smoking shisha is less harmful than smoking cigarettes.

Many people wrongly believe that bubbling tobacco smoke through water makes it safe.

He believed that if the tobacco smoke passed through a filter it would be safer, so he devised a small receptacle of water that smoke could pass through.

However, modern research states that filtering tobacco smoke through cold water does not make it safer.

The ancient belief of a 15th century physician combined with exotic looking waterpipes and a combination of sweet smelling tobaccos, honey molasses and dried fruit, along with deceptive advertising and a lack of information to educate people about the dangers of smoking shisha, has duped young people into believing that smoking shisha is harmless.

While, on the other hand, there is widespread awareness about the dangers of smoking cigarettes.

It’s no wonder that young people have been conned into believing that smoking shisha is a safer alternative to smoking cigarettes.

Shisha smokers often inhale more smoke than cigarette smokers because of the length of time a shisha session lasts.

One session can last up to an hour during which shisha smokers will inhale a large amount of tobacco smoke as well as the second-hand smoke of others.

A report from The World Health Organization (WHO) noted that the smoke inhaled in a typical one-hour hookah session can equal 100 cigarettes or more.

The WHO report also claims that even after it has been passed through water, shisha tobacco smoke still contains high levels of cancer-causing chemicals.

Shisha smoke may also contain combusted charcoal or wood which can increase the chemicals in the smoke that cause cancer and heart disease.

- Hydrogen cyanide and a whole bunch of potent carcinogens

- Nicotine, a chemical that causes an addictive effect

- Up to 36 times more carcinogenic tar than cigarette smoke

- Up to 15 times more carbon monoxide

Also, shisha contains tobacco; therefore, it is linked to the same serious and life-threatening illnesses as cigarettes, such as cancers, heart disease, lung disease and many more.

And, that’s not all! If the shisha pipe is not properly cleaned, sharing it with others can increase the risk of contracting diseases, such as tuberculosis, hepatitis, meningitis and other infectious diseases.

Since smoking shisha involves smoking for a longer period of time, inhaling higher levels of toxins deeper into the lungs and also sharing the waterpipe, there can be little doubt that smoking shisha is not just as dangerous as smoking cigarettes but even worse.

Shisha smoking is a way of life to some. It is the bonding moment with friends, and also a social event where one meets more friends. For Shisha smokers it is this interaction with different kinds of people that give them the feeling of machismo to men and the cool thing to be done today by the modern women.

Shisha smoking is the new trend and the new style of some people, to spend their past time or to relax. But all these enjoyments that a Shisha smoker experienced are only for the mean time. In the long run, this circle of friends would need to live their own lives. They will eventually meet someone special and decided to marry and have their own families. Then here comes the time where they encounter some of the problems.

By smoking Shisha, the smoke that contains harmful effects crawled into the smokers system and does all the damage to the body. So that a Shisha smoker whether a man or a woman should need to know the bad effects of smoking Shisha, that they will eventually encounter in their personal and family life.

Note also, that not only the direct Shisha smokers will have this consequences but also the innocent unborn child. Keep in mind that if you are smoking Shisha and are planning to make a child, be mindful that you and your partner is putting a precious life at risk. Do read the following to have an intelligent choice whether to smoke, or continue to smoke this deadly Shisha. I also include how Shisha affects the fetus.

Shisha smoking contains heavy metals like arsenic, chromium, lead, cobalt. The presence of the trace amount of these heavy metals in semen found to inhibit the function of enzyme contained in the acrosome of the sperm cell, which is the membrane that covers the head of the sperm.

- Shisha smoking or tobacco smoking could cause to decrease sperm motility.

- Shisha also affects the ability of men to produced sperm which result into low sperm production.

- In the long run the adverse effect of smoking Shisha can cause genetic changes that can affect the offspring.

- Since the Shisha pipe contains lots of infectious microorganisms and pregnant women have a suppressed immune system, so they are more likely to catch infections.

- Harmful heavy metals and toxins can be excreted in the breast milk which can affect the newborn.

- Women who smoke Shisha during pregnancy have babies with an increased risk for respiratory diseases.

- Like cigarettes, smoking Shisha can raise the risk of premature labour, stillbirth and other complications.

- The smoke from Shisha decreases the oxygen concentration in mother’s body which ultimately results to the shortness of breath to the fetus which could lead the baby towards death.

- Babies born to women who smoked one or more water pipes a day during pregnancy have lower birth weights (were at least 3½ ounces less) than babies born to non-smokers.

Our lifestyle can truly affect every areas of our life.

Most people are aware of the dangers that smoking Shisha presents to health, including cancers, lung and heart problems. But most people are not informed that smoking Shisha can go further as to affect the chance of a man and a woman to conceive a child. There is also the possibility of a Shisha smoker mother, to have a child that has birth defects. This problem could be prevented.

Prevention is better than cure, so that for those people who are tempted to try to smoke Shisha, you still have a chance to consider the above results. You have always the choice to make a difference.

For those people who are smoking Shisha for some time now, it is not too late to turn the wheel of your life. You have the option whether to smoke to you and your love ones destruction. Or make that choice to have a clean living and have a healthy, happy family in the future.

Knowledge on the subject of smoking Shisha is a great advantage. They say that what you do not know will not hurt you, but this is not always true. To have a bright future, you need to start doing what is proper and what is right at this very moment.

Shisha could destroy your life. For what you know about this subject will arm you with options, to know what is the right thing to do.