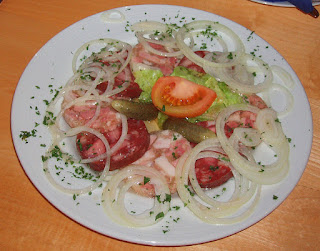 Sour Presssack
Bavarian cuisine is a style of cooking from Bavaria, Germany.

Bavarian cuisine includes many meat and Knodel dishes, and often uses flour. Due to its rural conditions and cold climate, only crops such as beets and potatoes do well in Bavaria, being a staple in the German diet.

The Bavarian dukes, especially the Wittelsbach family, developed Bavarian cuisine and refined it to be presentable to the royal court. This cuisine has belonged to wealthy households, especially in cities, since the 19th century.

The (old) Bavarian cuisine is closely connected to Czech cuisine and Austrian cuisine especially from Tyrol and Salzburg, mainly through the Wittelsbach and Habsburg families.

Already in the beginning, Bavarians were closely connected to their neighbours in Austria through linguistic, cultural and political similarities, which also reflected on the cuisine.

A characteristic Bavarian cuisine was further developed by both groups, with a distinct similarity to Franconian and Swabian cuisine. A Bavarian speciality is the Brotzeit, a savoury snack, which would originally be eaten between breakfast and lunch.

Regional cuisine in the various states of the German nation has received increasing attention since the late 19th century, particularly that of the larger cities. In cookbooks of that era termed Bavarian both domestic rural dishes and dishes inspired by French cuisine were published.

The cookbooks concentrated on dishes based on flour and Knodel. For the regular people, even the people living in cities, meat was usually only reserved for Sundays.

The 19th century cookbooks included many recipes for soups containing Knodel. The meat recipes were mostly based on beef and veal, where cooked beef was used for everyday meals. In the case of pork, suckling pig played a great role. The use of offal and the entire slaughtered animal - especially the calf - from head to toe was a special characteristic of the recipes collected in the Bavarian cookbooks.

Udders, tripe, calf head, calf hoofs, etc. have changed from 'poor man's dishes' to the prestigious Schmankerl of the new Bavarian regional cuisine.The prominence of head cheese, prepared both sweet and sour, seems to also be a speciality of Bavarian cuisine.

Knodel and noodles were a traditional festive dish in Bavaria. In the late 19th century, chopped pork with Knodel was a typical Bavarian regional dish. The Munich Weißwurst was invented. There were few recipes for mixed vegetables in the cookbooks, and stews played hardly any role, but the Pichelsteiner stew is said to be introduced in Eastern Bavaria in 1847.

In the 19th century, the vegetables that most of the Bavarians usually ate were Sauerkraut and beets. French-influenced dishes included Ragouts, Fricassee and "Bofflamott" Boeuf a la Mode, larded and marinated beef. This was mostly only reserved for the nobility, but was later also adopted into the cuisine of ordinary people. 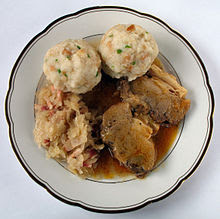 Schweinsbraten
A characteristic of the nurture of the Upper Bavarian rural people is the overall prominence of flour, milk and lard dishes with vegetables added and the diminished consumption of meat dishes on the five most important festive days of the year: Carnival, Easter, Pentecost, Kermesse and Christmas.

The everyday cuisine of the citizens of the state capital Munich differed somewhat from that of the rural people, especially by the greater consumption of meat. In the city, more people could afford beef, and on festival days, roast veal was preferred. From 1840 to 1841, with Munich having a population of about 83,000 citizens, a total of 76,979 calves were slaughtered, statically approximately one calf per citizen.

The number of slaughtered cows was about 20,000. Bratwursts of beef were especially popular.In the 19th century, potatoes were also accepted as a part of Bavarian cuisine, but they could still not replace the popularity of Dampfnudel.

The typical meat-oriented Munich cuisine was not always accepted by others. The Munich cuisine is based on the main concept of the eternal calf. In no other city in the world is so much veal consumed as in Munich.

Even breakfast consists mainly of veal in all possible forms mostly sausages and calf viscus! The dinner and evening meal consist only of all sorts of veal And still the Munich innkeepers speak of a substantial selection of dishes without realising that the one-sidedness of the Munich veal cuisine cannot be surpassed any more.

- Sauerne Suppn ("sour soup", a soup made of hardened milk)