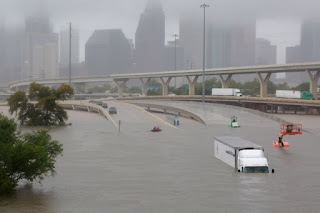 President Trump took to Twitter Sunday to indicate he was monitoring Tropical Storm Harvey, which continues to wreak havoc on the Texas Gulf Coast after being downgraded from a hurricane.

Wedged between the praise for emergency responders, however, were missives touching on subjects such as his proposed border wall between the U.S. and Mexico and his attempt to renegotiate the North American Free Trade Agreement.

Trump’s first tweet of the day was a post promoting a book by Milwaukee County Sheriff David Clarke.

He also teased an upcoming trip to Missouri, mentioning he “won by a lot in ’16” there,” and contended that Democratic Sen. Claire McCaskill will lose her seat in 2018.

Soon after, Trump touched on two major themes of his campaign, building a southern border wall and renegotiating or terminating NAFTA.

At a rally in Phoenix Tuesday, Trump threatened a government shutdown if Congress did not fund the wall’s construction, a stark departure from his campaign promise that Mexico would pay for it. Trump’s tweet Sunday assured “Mexico will pay for it through reimbursement/other.”

He followed that up with a dig at the U.S.’s southern and northern neighbors, claiming that both Mexico and Canada were being very difficult throughout the NAFTA renegotiation process.

Turning back to the disaster in Texas, Trump praised the “the great coordination between all levels of government and great talent on the ground.

He also said he will visit Texas as soon as that trip can be made without causing disruption to the ongoing emergency response. Trump seemed to marvel at the intensity of the storm.

Tropical Storm Harvey made landfall in Texas Friday as a Category 4 hurricane, and images out of Houston and the surrounding area show severe flooding.

Officials confirmed at least two fatalities as of Sunday, with some outlets reporting up to five deaths.

We do value our freedom here in Texas. People floating down Buffalo Bayou on their principles, proud residents of the largest city in these United States that did not grow in accordance with zoning ordinances.

The feeling there was that persons who own real estate should be free to develop it as they wish.

Houston, also known as the Bayou City, is a great location because of its access to international shipping in the Gulf of Mexico.

It is not a great location for building, though, because of all its impervious cover. If water could easily sink into the ground, there would be less of it ripping down Houston’s rivers that just a week ago were overcrowded streets.

In less-free cities, the jackbooted thugs in the zoning department impose limits on the amount of impervious cover in a development. Some of the limits can be finessed by lining parking lots with bricks turned sideways, so grass can be planted in the holes.

If you meet the impervious cover standards, you still might get your entire plat chucked into the round file because some computer has determined that your business plan will attract automobile traffic in excess of the carrying capacity of nearby roads.

I got snarky in the law school class where I first heard that Houston had no zoning, wishing out loud I could build a rendering plant in the so-posh River Oaks neighborhood.

River Oaks remains some of the most expensive real estate in the U.S., a model of what could be done with appropriate planning. Developers accomplished their ends by deed restrictions and gentlemen’s agreements.

Home prices were required to exceed $7,000 back in the 1920s and deed restrictions even specified allowable architectural styles.

Gentlemen of the times, of course, excluded Jews and “Negroes” and similar undesirables. After Houston annexed River Oaks in 1927, the suburb became a neighborhood, but it remained a haven for swell folks as tightly regulated by custom as Houston was unregulated by law.

Impervious cover in Houston, meanwhile, has increased and continues to increase. I look at my television and see that the streets are flooded.

The San Jacinto River and Buffalo Bayou are out of their banks. People are wading through waist-deep water carrying a few possessions, children and pets.

This catastrophic flooding is the result of 20 to 30 inches of rain. Adding to the water in the streets now, the Army Corps of Engineers has announced several reservoirs in the area will be opening floodgates to avoid failure of the dams, and the floodgates are expected to stay open for weeks because so much water will be coming downstream.

Additionally, the National Weather Service is warning Houston to expect another 15 to 25 inches of rain.

Hurricane Harvey is ambling off toward Louisiana, taking with him the high winds and the danger of storm surges but leaving rain and more rain.

Critics are complaining that Houston issued no mandatory evacuation order.

That would only occur to somebody who has never sat in the parking lot that Loop 610 becomes at least twice a day when people are just going to and from work.

Putting the entire population on the roads at the same time, roads that are prone to flash floods when rains are nowhere near these historic levels, would mean not just inconvenience but fatalities.

There would be at least as many rescues to be done as there are now, but they would be more dangerous rescues.

Agreeing that mandatory evacuation would have driven up the casualty numbers, Houston Police Chief Art Acevedo told MSNBC that half of the population would refuse to evacuate, but enough would do so to cause massive traffic jams that would leave everyone stuck in them at extreme danger in flash floods.