SPAIN: I Prefer Him Going To Jail To Him Dying, Says Mother Of Barcelona Attack Suspect 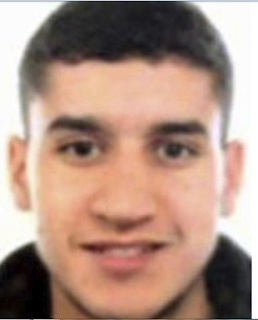 Desperate to ease public fears and neutralise a terrorist cell responsible for the deadliest attack in Spain in a decade, Spanish police erected 800 checkpoints across the region of Catalonia on Sunday - part of a massive manhunt for a Moroccan-born man they suspect was the driver of the van that killed 13 and injured scores in Barcelona last week.

Authorities could not say whether Younes Abouyaaquob, 22, was still in Spain or had crossed the border into France, but they were clearly frustrated that he continued to elude police.

We don’t know where he is, regional police chief Josep Lluís Trapero said at a news briefing in Barcelona, adding that the terrorist cell had planned a “much more serious attack” that was probably thwarted by an accidental explosion Wednesday at a house used to assemble components for a bomb.

Authorities said Sunday that they had identified three more of the victims in the Barcelona attack, including Julian Cadman, a 7-year-old boy with dual British and Australian citizenship who had been missing since Thursday. He was separated from his family in the panic unleashed by the attack and struck by the speeding van.

One American, Jared Tucker, 42, the father of three, was identified earlier as a victim. He was killed while on his honeymoon.

Inspector Albert Oliva, the chief spokesman for the Catalan national police, stressed that the cell made up of 12 teens and young men - most of them of Moroccan descent from Ripoll, a picturesque mountain town near the French border - were either dead, arrested or in hiding.

In an emotional plea on Spanish television, the mother of Abouyaaquob, the main missing suspect, begged her son to turn himself in.

I prefer him going to jail to him dying, said Hanno Ghanim, the mother.

Police kept a close eye on the streets of Ripoll on Sunday, on the lookout for Abouyaaqoub and others. Officers were parked outside the family homes of the suspected members of the cell.

Abouyaaqoub’s mother was hospitalised Sunday, suffering from stress, family members said. His aunt said “Someone brainwashed them. This has destroyed our family. We are devastated. We don’t understand what happened.”

Catalan police officials say they have no concrete information about how the cell members were radicalised and recruited - nor how they plotted their attacks and kept their secrets in a close-knit community of Moroccan immigrants.

The consensus among family members in Ripoll was that the young men fell under the sway of a charismatic cleric who had possibly turned their sons, brothers and cousins toward violence.

All eyes in the Spanish media are on a suspect named as Abdelbaki Essati, who was employed at a mosque in Ripoll and whose home was searched Saturday.

Police said that Essati had not been connected to previous terrorism-related investigations but that an unidentified friend of his had been implicated.

At the small storefront mosque in Ripoll, a handwritten list of members posted on a bulletin board includes several of the names tied to the terrorist cell.

Ali Yassine, the director of the mosque, said that Essati was paid about $1,000 a month to serve as imam. Local benefactors paid his rent and helped with groceries.

As part of his duties, Essati taught younger children the Koran, Arabic language and religious practices. He had worked at the mosque for the past 18 months and had been in the town for about two years.

“He was a normal man, normal, you understand? That is all I can tell you. He did not preach hate. He did not recruit in the mosque,” said Yassine, whose eyes welled with tears as he spoke.

“He was teaching my own sons,” ages 7 and 8, Yassine said. “Do you think we would allow him to teach our kids to kill? We all have families here.”

Essati, who was from Morocco, told people in Ripoll that he had a wife and nine children back home.

Members of the mosque said that Essati’s name was given to local police more than a year ago, as part of security protocol to keep a closer eye on Muslim preachers, and that the authorities did not flag him.

A close relative of the Hychami brothers, Mohamed and Omar, who were members of the cell and are both now believed dead, said the Muslim cleric would often drink mint tea in a Moroccan cafe by the local train station.

“In his sermons, he would talk about how we should all live in peace, how the Moroccans here should work hard and be thankful to the Spanish people for their hospitality,” the relative said, who that asked his name not be used because he had to keep living in Ripoll after the media attention faded.

“Did he show us just one face?” he asked. “Did this son of the devil take the best kids in Ripoll and turn them?”

After the end of the Muslim holy month of Ramadan in June, the cleric told mosque leaders he wanted to take three months for holiday.

They said no, that they needed him, but the preacher insisted and left town in July and has not been seen since.
Police searched his empty flat on Saturday.