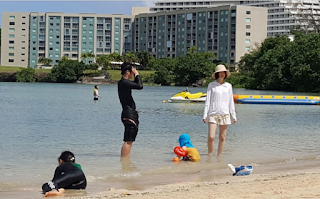 Most travel agencies still seeing steady flow of Chinese visitors to the US territory at the centre of a stand-off between Pyongyang and Washington.

North Korean leader said he would not yet pursue plans to fire missiles near the island, according to state media, saying he would instead “watch a little more the foolish and stupid conduct of the Yankees”.

Chinese tourists are continuing to visit Guam – albeit in small numbers – as residents started to breathe a little more easily after North Korean leader Kim Jong-un backtracked on his threat to the US Territory.

Most Chinese tour agencies said visitor numbers to the Pacific island had so far been unaffected by the nuclear stand-off between Pyongyang and Washington although some firms had stopped taking tours there.

So far [the missile threat] has not proved a very serious issue for us, so everything’s normal, said a customer service manager from Jiangsu Singsly Tourism in Suzhou, eastern Jiangsu province.

A few of our customers just left for Guam this past weekend, he said, adding that the firm sends between five and 10 clients to the island each week.

China’s biggest online tour agency Ctrip said it had no plans to cancel any of its packages to Guam, though it declined to disclose visitor numbers. Other agencies said most booking services for tours to the island in the upcoming weeks and months remained unaffected.

But the China Youth Travel Service’s Shanghai branch said it had stopped accepting visitors to Guam.
We’ve cancelled all group tours to Guam recently because of the tensions there. We will resume the tours when things become stable,a manager said.

Jia Jia Mei Bao, a Beijing-based birth tourism agency, said some expectant Chinese mothers had also cancelled their plans to deliver their babies on the island, where the newborns would become eligible for US citizenship.

Guam, which is about 2,500km east of the Philippines, is the nearest birth tourism destination to China.

We’ve advised our clients to choose Saipan an hour’s flight away from Guam instead due to the tensions in Guam. We were about to build a postnatal care centre there, but now have to postpone our plans until things get better, said a staff member who wanted to be known only by her surname He.

One client had just given birth on the island and remained there for the time being, but there was no new business now because of the missile threat, she said.

But our client numbers are still small because Guam is a small place and the cost is really high,she said, adding that the agency, one of just two Chinese birth tourism firms doing business on the island, welcomed only about 10 clients to Guam each year.

Tourism businesses downplayed the impact of the recent tensions on visitor numbers.

Other industry insiders said the recent tensions were unlikely to affect Chinese tourism to the island severely as it was not the peak tourist season and its visitor base was still small despite being a rising tourist destination.

More Chinese people have been going to Guam in recent years because it’s a US territory and it has a very big duty-free store, said Li Shuang, a former manager at BTG International Travel and Tours who now freelances within the travel industry.

Some 26,000 Chinese tourists visited the island last year, up more than 11 per cent from 2015, according to the Guam visitors’ bureau as quoted in Chinese media.

The growth in Chinese tourists to Guam was because of strong overall demand for overseas travel, Li said, but the increase in actual numbers was still low.

After all, Guam is a very small island with very limited tourism facilities. So it can’t receive a lot of tourists, he said.

A staff member from a Beijing branch of the China International Travel Service said: We offer tours only from November to next spring. It’s the rainy season now, so not many people are going.

China’s National Tourism Administration has not issued any travel advice on Guam so far, and neither has the Chinese embassy in the US.
With a population of more than 162,000, Guam is also an important US military base.

On Tuesday North Korean leader said he would not yet pursue plans to fire missiles near the island, according to state media, saying he would instead “watch a little more the foolish and stupid conduct of the Yankees”.