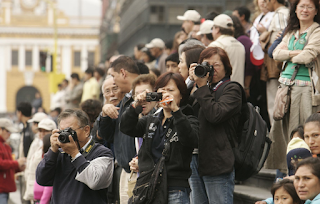 A string of violent attacks in ­western Europe scared ­Chinese tourists, a fast-growing segment of the travel industry.

The number of mainland tourists travelling to Europe was up 32 per cent to 4.78 million in 2015, with growth strongest among those heading to Germany and France. But that was before the terrorist attacks in Paris on November 13, when at least 130 people were killed and many more wounded.

Since then, Chinese interest in France, in particular, has been declining. France issued just 320,000 visas in China in the first six months of this year, a drop of 15 per cent from the same time in 2015, according to the French ­embassy in Beijing.

Even more mainland tourists will be deterred from European destinations by the killings in Nice on July 14, the Munich shooting last week and the knife attack in Normandy this week, ­analysts and travel agents say.

Leading mainland travel agency Ctrip.com said more travellers were shifting their sights to other parts of the continent.

Since the terrorist attack in Paris last year, many tourists have looked to Eastern European destinations such as Hungary and the Czech Republic or Northern European countries such as ­Finland and Sweden, the company said.

Partly as a result, tour packages to France were now 1,000 yuan (HK$1,160) to 2,000 yuan cheaper, Ctrip said.
A manager with another big online travel agency said turnover at his business for European routes doubled in 2015 but had since ground to a halt.

He said his firm’s overall business was fine because it offered trips to 150 countries but the violence could rattle the confidence of many mainland tourists, dealing a fatal blow to smaller agencies specialising in Europe.

Shenzhen office worker Qin Danfeng said she would have ­cancelled her trip to Germany if she could have got a refund on her booking.
She said anxieties about the trip took some of the shine off the holiday.

My parents told me not to talk to strangers and they chatted to me on WeChat every day to make sure that I was safe, Qin aid.

Sun Huili, a Shanghai primary school teacher who returned home on Sunday from her 10-day trip to the Czech Republic and Austria, said she went to France, Italy and Switzerland last summer with 10 of her friends, but only one wanted to go to Europe with her this year.

They said they were concerned about their safety because so many terrorist attacks have happened in recent months, she said. Some didn’t go anywhere this summer, and some chose other destinations like Australia.

Last year a record 120 million mainlanders headed overseas, with the number going to Germany up 70 per cent, Italy 41 per cent and France 48 per cent, ­according to Neil Wang, greater China president of consulting firm Frost & Sullivan.

But that momentum is reversing rapidly. As a result of the ­series of violent attacks in France, we expect that there will be a dramatic slide in mainland tourists there this year, he said.

But thanks to Brexit and the fall in value of the pound, the number of mainland tourists heading to Britain was expected to be up by half propelling it ahead of France and Italy in popularity among mainland travellers, Wang said