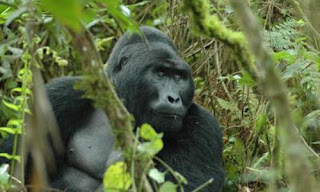 The Mgahinga Gorilla National Park (MGNP) is in the Kisoro District of far south-western Uganda.

The park is in the Virunga Mountains and in the Albertine Rift montane forests ecoregion. Totaling about 33.7 square kilometres (13.0 sq mi), it is the smallest of Uganda's national parks.

Mgahinga gorilla national park is the smallest park in the country. It is about 33.7sq km and situated in south western Uganda, in Kisoro district.

The British administration declared the area a game sanctuary in 1930 and it was finally gazetted in 1991 and it is part of the Virunga conservation area.

The park takes its name from Gahinga,the local word for the piles of volcanic stones cleared from farmland at the foot of the volcanoes.

Mgahinga Gorilla National Park sits in the clouds approximately at an altitude of between 2,227m and 4,127m. As its name portrays, the park was established to protect the rare mountain gorillas that inhabit its forests and the park is home for the endangered golden monkey

Mgahinga is home to the habituated Nyakagezi gorilla group that can be visited while on a Uganda safari, a fairly nomadic bunch that has been known to cross the border into Rwanda and the Congo.

The family includes the lead silverback Bugingo who is around 50 years old and father to most of the group; his silverback sons, Mark and Marfia; and two blackbacks, Rukundo and Ndungutse, who love to pose and play in the trees.

The mountain gorilla (Gorilla beringei beringei) is one of the two subspecies of the eastern gorilla. There are two populations. One is found in the Virunga volcanic mountains of Central Africa, within three National Parks: Mgahinga, in south-west Uganda Volcanoes, in north-west Rwanda; and Virunga in the eastern Democratic Republic of Congo (DRC).

The other is found in Uganda's Bwindi Impenetrable National Park. Bwindi population in Uganda may be a separate subspecies though no description has been finished. As of November 2012, the estimated total number of mountain gorillas is around 880.

Mgahinga Gorilla National Park and the Bwindi Impenetrable National Park are the only parks within Uganda that protect habitat for the mountain gorilla, an IUCN Red List endangered species.

The park experiences two wet rainy seasons: February to May; and September to December. The average amount of monthly rainfall varies from 250 millimetres (9.8 in) in October to 10 millimetres (0.39 in) in July.

Other good birding areas are at the tall montane forest at 2, 600, and bamboo belt at about 2,500m above sea level. The Rwenzori Turaco is mostly seen at an approximate of 2,700m. Along the Congo-Uganda border and on ground level, the Chubb's Cisticola, also the Banded Prinia and Doherty's, Red-faced Woodland Warbler, Bush-shrike are vocal yet inconspicuous inhabitants of the tangled vegetation at the forest’s edge.

A tough day’s hike will take you to the peaks of Muhavura; Gahinga or Sabinyo .All three volcanoes in this park can be climbed. Mountain Sabinyo which is, 3,669m high can take roughly eight hours to cover a distance of 14km trip, following a steep ridge up to the peak.

It takes around six hours to ascend and descend Mt. Gahinga (3,474m), topped by giant lobelia and a swamp-filled crater During this activity the most Lucky climbers can have chance see golden monkeys on their way through the bamboo forest.

Mt. Muhavura is said to be having the highest peak at 4,127m, and this 12km round trip takes roughly eight hours. Once at the top, hikers are paid greatly on a clear day with views of the Bwindi Impenetrable Forest and the peaks of the Rwenzori, Virunga Volcanoes, and Lake Edward.

Some of the steep mountain slopes contain caves formed by lava tubes, one of them being the famous Garama Cave located near the park headquarters. This is a sacred place for the Batwa, and during the Batwa Trail you can discover how it was used as a shelter during battles and as a place to store looted treasures. Golden Monkey In Mgahinga Park
The golden monkey is a species of Old World monkey found in the Virunga volcanic mountains of Central Africa, including four national parks: Mgahinga, in south-west Uganda; Volcanoes, in north-west Rwanda; and Virunga and Kahuzi-Biéga, in the eastern Democratic Republic of Congo. It is restricted to highland forest, especially near bamboo.

This species was previously thought to be a subspecies of the blue monkey and the two are similar overall, but the golden monkey has a golden-orange patch on the upper flanks and back.

Not much is known about the golden monkey's behavior. It lives in social groups of up to 30 individuals. Its diet consists mainly of young bamboo leaves, fruits, bamboo branch lets, bamboo shoots, invertebrates, flowers, and shrubs.

During the season where ripe fruit is available they will remain in those areas. When the rainy season begins this causes bamboo shooting to occur and the golden monkeys are found more in these areas.

If there is an area consisting of mixed fruit and bamboo, the monkeys will tend to frequent that area more than an area of just bamboo.

Golden monkeys are most frequently seen in forests with bamboo, and this may suggest that this is one of the major preferences of the species.

The endangered golden monkey is endemic to the Albertine Rift, and Mgahinga Gorilla National Park offers a rare chance to track these striking creatures, high in the dense bamboo forests on the Gahinga trail.

There is an estimated 3000-4000 individual in the Virunga area which 42-60 are habituated in Mgahinga.

The Park's varied medicinal plants and fascinating Ngarama Cave can be explored with a Batwa guide – this tribe of hunter-gatherers was the region's original inhabitants, and their ancient knowledge of the forest remains unrivalled.

When you visit this important park, the guide will know which areas are most frequented by each species of animal.

On 7 November 2013, the M23 Movement, a Congolese rebel group, surrendered in the park after being defeated by the Congolese Army in the M23 rebellion.