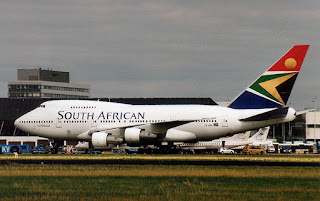 In its latest audited statements, the airline says it urgently needs more capital to pay its debts, and to re-fleet.

It's not only the national airline that needs more money to stay in the sky. It's smaller, regional counterpart South African (SA) Express says it also needs urgent capital to continue operating.

The audited financial statements of the regional airline for 2015/16 have been tabled in Parliament.

Last week it was revealed in the National Assembly that Cabinet is considering a R10 billion bail out to keep South African Airways (SAA) from defaulting on its loans.

But this was largely due to it being able to extend the repayment of a R121 million loan to 2023.

In its latest audited statements, the airline says it urgently needs more capital to pay its debts, and to re-fleet.

In June, the airline's executives told MPs that it was again expected to fall into the red when its 2016-2017 figures are audited.

The Democratic Alliances' (DA) Natasha Mazzone said: "We need to make sure they can pay their debt firstly and secondly that we can get this airline on some kind of trajectory that sees them running at a clean profit going forward."

MPs will be grappling with the figures at a meeting of the Public Accounts Committee later this week.

Finance Minister Malusi Gigaba says the government has not yet adopted any of the SAA recapitalisation proposals.

Gigaba made the comments on Friday following a meeting with the CEO Initiative.

It emerged this week that government was considering selling its shares in Telkom to raise the capital to bail out the national carrier.

Gigaba says the government has not yet adopted any of the SAA recapitalisation proposals.

I would like to, therefore, caution against hysteria created by our considering of various options. Cabinet has appointed four ministers to look at various options to capitalise South African Airways.

He says apart from selling Telkom shares, there are other ideas on the table.

Such as the disposal of non-core assets, share equity, Private Public Partnerships and variety of other options that we’re going to be looking at.

Gigaba says the issue is being dealt with urgently.

SA Express says that like SAA, it will need a cash injection to keep their planes in the sky.

Government’s ailing regional airline SA Express will have to explain to Parliament this week why it’s incurred more than R30 million in fruitless and wasteful expenditure.

The airline’s latest audited financial statements reveal that while it made a R16 million profit in 2015/16, it also incurred an irregular expenditure of the same amount.

Chairperson of Parliament’s Standing Committee on Public Accounts (Scopa) Themba Godi says Members of Parliament (MPs) will be considering the financial position of the airline against the backdrop of talks of a merger with South African Airways (SAA).

SA Express says its short to long term debt is hampering its profitability and its weak balance sheet means it also can’t raise any more cash.

Scopa chairperson Themba Godi said: Their audit is not proving to be an improvement but a worsening situation.

But it’s the airline’s irregular, fruitless and wasteful expenditure that Scopa really wants to probe.

The airline says it won’t be able to recover the more than R30 million in fruitless and wasteful expenditure because it was incurred on interest and penalties as a result of its poor cash flow.

If you have an entity that’s basically ailing you can’t then have fruitless and wasteful expenditure of whatever quantity.

The airline says that like SAA, it will need a cash injection to keep their planes in the sky.

The Democratic Alliance (DA) in Parliament revealed that government may give South African Airways (SAA) another bailout to the tune of R10 billion.

Stephen Grootes spoke to Scopa chair Themba Godi who says the proceedings regarding the plan that is being considered to bail out SAA is only the beginning in tackling the problems facing the airline.