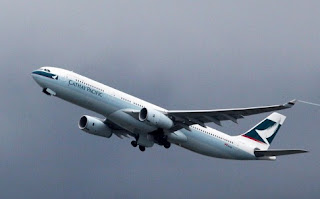 Hong Kong dug in on Tuesday night for a siege by a storm on track to be one of the worst in recent years, and expected to cripple air travel, as Typhoon Hato barrelled towards the coast of southern China, the city in its path.

As the Observatory prepared to raise the No 8 signal before 5.30am, airlines on Tuesday were already warning of cancellations and ­delays on Wednesday that could turn out to be the worst disruptions since Hong Kong International Airport opened nearly two decades ago.

The Education Bureau announced schools would be closed on Wednesday.

The approach of Hato, the ­Japanese word for pigeon, was packing enough of a punch for China’s national weather authorities to issue their second highest alert for rainstorms and warn of downpours hitting the region.

The Observatory said the structure of Hato remained rather intact and compact, tracking steadily towards the coast of Guangdong. It would be closest to Hong Kong at noon on Wednesday, coming within 100 kilometres of the city, before making landfall in neighbouring Guangdong province.

Hato will pose a considerable threat to Hong Kong, senior scientific officer Queenie Lam Ching-chi said. With an intensity of 120km per hour at its centre, it has all the conditions to develop into a stronger storm.

A higher signal, if the typhoon warranted it, would mean a rare No 10, which has not been issued since the city felt the ferocity of ­Typhoon Vicente in 2012.

By 2am on Wednesday, the typhoon was about 240km southeast of Hong Kong and was forecast to move west-northwest at about 25km per hour ­towards the coast of Guangdong.

The No 3 signal was raised at 6.20pm after a sweltering day ­setting another record for summer temperatures, with meteorologists forecasting winds of up to 117km per hour.

The Airport Authority said flights were operating normally on Tuesday but warned that it could be a different story on Wednesday with severe disruptions, and advised travellers to contact their airlines before going to the airport.

At least 320 flights operated by Cathay Pacific, Cathay Dragon and Hong Kong Airlines, scheduled to take off or land between 6am and 5pm on Wednesday, have been cancelled. The storm could be at its peak during those hours.

Hundreds more flights to and from the city, and across the ­region, were also expected to be cancelled due to Hato.

Wind speed and direction are severely impacting flight operations, and are forecast to do so throughout Wednesday regardless of the typhoon signal level, Cathay Pacific said as it announced today’s cancellations.

The last major storm to cause major travel chaos in Hong Kong was Typhoon Nida, in 2016. It affected 1,000 flights.

Across the city yesterday, people rushed to supermarkets for food and supplies before heading home to batten down the hatches.

A mother of a two-year-old girl, surnamed Chan, snapped up instant noodles, drinks, and even tissue papers to prepare for the typhoon. We are mainly worried that supermarkets could be closed during signal No 8, said Chan.

Meanwhile, staff at a bakery on Johnston Road in Wan Chai said they had not yet seen a sales surge. A sales assistant, Jojo Lau, said: Our business remains the same as usual.

With Hato exerting its influence long before nearing the city, Hongkongers endured another day of very hot and smoggy conditions on Tuesday.
Maximum temperatures hit 36.6 degrees Celsius at the Observatory in Tsim Sha Tsui, the ­highest ever to be recorded there in 132 years.