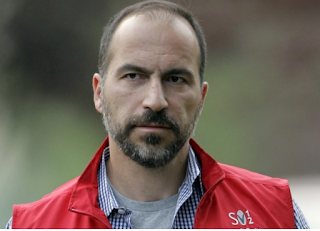 Khosrowshahi, 48, would take on the daunting task of mending Uber’s image, repairing frayed relations among investors, rebuilding employee morale and creating a profitable business after seven years of losses.

In Khosrowshahi, Uber’s board has picked an executive with a track record of driving growth while also delivering profits - precisely what the unprofitable Uber needs to satisfy investors.

He has also proven capable of making Expedia the leader in another industry full of change and competition - online travel.

But he would also have to contend with the legacy of Travis Kalanick, Uber’s pugnacious co-founder, who was ousted as CEO in June after shareholders representing about 40 per cent of the company’s voting power signed a letter asking him to step down amid growing concern over his behaviour and that of senior managers under him.

The Uber board of directors has been meeting daily and deliberated on its pick for CEO throughout the weekend. A spokeswoman said on Sunday that the board had voted but was declining to disclose its choice publicly until after informing employees.

Khosrowshahi, who has run Expedia for 12 years, was not known to the public to be among the top candidates for the job.

He beat out Jeff Immelt, chairman of General Electric Co and one of the finalists for the job, who said earlier on Sunday he was no longer in the running.

Meg Whitman, chief executive of Hewlett Packard Enterprise, had also been a leading candidate, according to sources close to the process. Whitman last month denied having any interest in the job.

Unlike Immelt and Whitman, Khosrowshahi is not a fixture in the celebrity executive community. And since Expedia is based in Bellevue, Washington, he is a Silicon Valley outsider.

The Iranian-American businessman came to the United States as a child in 1978 with his parents following the Iranian Revolution. He received a bachelor’s degree in engineering from Brown University and got his start at investment bank Allen and Co.

Khosrowshahi has certainly done well for himself - in 2015 he was the highest paid CEO in the country, mainly because of a nearly US$91 million stock option grant. He is also on the board of the New York Times Company and sports merchandise company Fanatics Inc.

Under Khosrowshahi’s leadership, Expedia more than doubled its annual revenue since 2012 to nearly US$8.8 billion in 2016. The company reported net income of US$281.8 million for 2016.

In an interview with CNBC in May, he said: Analysts are focused on margins. I am focused on growth.

He led Expedia through a string of acquisitions since 2014, buying Airbnb rival HomeAway Inc for US$3.9 billion, Orbitz Worldwide Inc for US$1.3 billion and Travelocity for US$280 million, cobbling together an online travel empire. Expedia is the world’s largest online travel agency by bookings.

He has been an outspoken critic of US President Donald Trump, blasting Trump’s travel ban, which includes Iran, as inward-looking and reactionary. Expedia filed a legal challenge to the ban.

At Uber, he would bring an end to a company culture built on founder control. Kalanick enjoyed sweeping authority on the board and nearly complete autonomy in running the company, a governance style that helped to create a workplace that had few checks and balances.

Uber has been hit by allegations of sexual harassment, a lawsuit alleging trade-secrets theft, a federal criminal probe over use of software to evade city regulators, and allegations of executives mishandling the medical records of a victim who was raped by her Uber driver in India, among other controversies.

Uber was valued at US$68 billion at its most recent investment last year, but recently some mutual funds have written down the value of their Uber investment by as much as 15 per cent, a sign of wavering confidence in the company.

Despite the controversies, Uber is still a growing company.

Last week, the company reported a 16 per cent increase in ride bookings and a 17 per cent jump in net revenue for the second quarter over the previous period, and its losses shrank by 9 per cent.