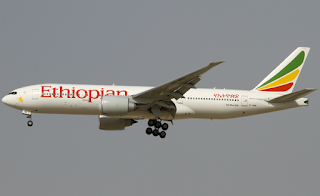 Ethiopian Airlines is negotiating with the Nigerian government to take over the bankrupt Arik Air, a senior official confirmed in Addis Ababa.

The Director of International Service at the Ethiopian Airlines Group, Mr Esayas Weldemariam, Wednesday said they were expanding their presence in West Africa.

Following the bid opened by the Nigerian government, we are negotiating to secure management contract of Arik Air, Mr Esayas said, responding to the rumours about the impending deal.

Arik Air, which is one of the largest private airlines in Nigeria, has been serving as the de-facto national carrier for the most populous state in Africa.

Following the failure to service its debts and pay employees salaries, Arik Air was last February taken over by the government.

Ethiopian Airlines also manages Asky Airlines in Lome, in a joint ownership with the Togo government, and the Malawian Airlines, also jointly with the government.

The Addis Ababa flag carrier, which began operations in April 1946, has won several accolades in the recent past including African Airline of the Year in 2015 and 2016 by the African Aviation and in 2014 ranked the largest in Africa in revenue by the International Air Transport Association (IATA).

Ethiopian Airlines Group, which has several related business wings, envisages becoming a $10 billion revenue generating company by 2030, with a total of 140 aircraft, according to Mr Esayas.

It currently has a fleet of 92 aircraft, flying to 104 international 19 local destinations.

The airline reported a 70 per cent jump in full year 2016 net profit to $265 million boosted by an 18 per cent increase in passenger numbers over the period.

Ethiopian Airlines has placed an order for more than a dozen new Airbus, Boeing and Bombardier aircraft, cementing its position as the regional aviation giant.

The airline announced at the Paris Air Show that it had placed a $3 billion order for 10 Airbus A350-900 aeroplanes, in addition to at least another two it already has on order.

It is looking at more wide-bodied aircraft to help it boost its hub-based business model, which primarily relies on moving regional and continental travellers through its Addis Ababa hub.

Airlines group chief executive Tewolde Gebremariam said that it would be deploying the new aircraft on its long range routes to meet increased customer demand.

We are very happy we made that decision very early in the A350 programme. Now we see the performance of the aircraft is up to expectations. The performance, operational and cost efficiencies we have achieved with our initial A350-900s have resulted in these additional 10 aircraft orders, Mr Tewolde said.

Last June, Ethiopian Airlines took delivery of the first of its original order for 12 A350s and now operates four of the type with three leased from AerCap and one leased from PingAn Aircraft Leasing.

The airline also signed a $1.5 billion engine order with Rolls-Royce that will see the latter provide Trent XWB engines for the 10 new Airbus A350-900 aircraft. In addition, the order includes engine service parts for 14 of the aircraft already in service.

Ethiopian Airlines ordered Trent 1000 engines for six Boeing 787 Dreamliner aircraft at the 2016 Paris Airshow, five of which are in service, and has lease arrangements for an additional four aircraft.

On Wednesday, the airline also announced that it had signed a commitment with Boeing for the purchase of two B777 freighters at a cost of $651.4 million. It also confirmed that it had firmed up the 10 Boeing 737 options included in its original order placed back in 2014, pushing its order to 30. Ethiopian Airlines currently operates six of this type alongside two B757-200s.

We still remain with Europe as Africa’s largest trading partner and that has an impact on what we do. Having a very good aeroplane from Europe, is a perfect match. We will deploy these additional aircraft on our long-haul routes connecting Addis Ababa with destinations in Africa, Europe, the Middle East and Asia, Mr Tewolde said, complimenting the overall performance of the Boeing 787 Dreamliner.

Wonderful article! We are linking to this great post on our site. Keep up the good writing.
Royal Car Rental Rawalpindi