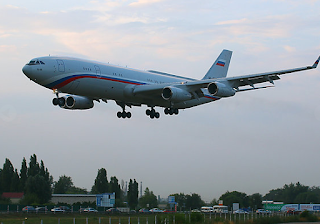 "The Il-96-400 plane will become a very important milestone in returning the market of domestic air transportation, including the wide-body segment… And we will do it, because we rely on that unique experience, on those traditions, on that dedication to business that has always characterized the Voronezh aircraft manufacturers," Rogozin said in Voronezh at an event marking the occasion of the 85th anniversary of the aviation plant.

Rogozin also noted that work related to the forthcoming tests of the Il-112V light military transport aircraft, which is expected to replace the fleet of Russia's aging Antonov An-26 planes, is ongoing.

The Il-96-400 is a larger modification of the Russian-made long-haul wide-fuselage passenger airliner Il-96-300, which can carry up to 300 people.

The new plane has four powerful engines and advanced avionics. It weighs 270 tonnes and has a maximum flight range of 7,500 miles.

The recently formed Azimuth airline received an operator's certificate - a document that gives the right to a legal person to fly, the air carrier's press service reported.

Currently, a set of preparatory works is being carried out, the commencement of flights is planned for September.

Azimuth will operate flights on comfortable aircraft Sukhoi Superjet 100 on routes that connect cities both within the Southern and North Caucasus Federal Districts and with the cities of other regions of Russia.

Meanwhile,Russian aircraft will carry out observation flights over Latvia and Lithuania from August 21-26 under the Treaty on Open Skies, the Russian Defense Ministry said in a statement, citing Sergei Ryzhkov, the head of Russia's National Nuclear Risk Reduction Center.

The observation flights will be carried out in from August 21 to August 26 from airfields in Riga and Siauliai, with representatives of both Baltic countries on board controlling the use of observation equipment and fulfillment of the treaty’s provisions, the statement said.

According to head of the Russian National Nuclear Risk Reduction Center Sergei Ryzhkov, as part of the international Open Skies Treaty, a group of Russian inspectors plans to sequentially carry out observation flights on board of Russian An-30B aircraft over the territories of Latvia and Lithuania, the ministry's statement said.

The Treaty on Open Skies was signed in March 1992 and entered into force on January 1, 2002. It establishes the regime of unarmed aerial observation flights over the territories of its participants and enables them to gather information about military forces and activities.