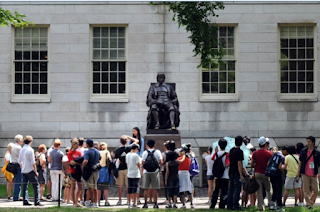 Shanghai middle-schooler Chen Mingxuan doesn’t intend to study at Oxford or Cambridge but her visit to the two top British universities this month left a deep impression on her.

Every house has centuries-old stories to tell, the teenager wrote in her travel diary. Just touching the stones, the bricks of each house, I can feel the campus’ heartbeat They hold plenty of stories, of big achievements, great discoveries.

Mingxuan’s parents organised the trip to give the 15-year-old a taste of British culture but they were not alone – Oxford and Cambridge were crowded with busloads of Chinese tourists.

I saw groups of Chinese student tourists everywhere, she said. When I took pictures, they would enter the frame of my shot.

Education tourism is a booming business in China – it raked in 30 billion yuan (US$4.5 billion) in revenue last year is expected to grow 30 per cent annually to hit a trillion yuan within a decade.

Some 650,000 Chinese went on overseas study trips last year, Beijing Daily reported this month. The figure was an estimated 500,000 two years ago, according to Shanghai-based 2limi.com in 2015.

One company, Shanghai-based One Smart Education Group, has been organising study trips since 2006 and has seen the number of its clients grow by at least 70 per cent a year, according to deputy general manager Zachary Liu Zeyang.

This summer, One Smart is sending more than 450 students to visit top universities in Britain and the United States. A three-week trip to Britain – taking in big-name institutions like Oxford, Cambridge and Imperial College London as well as enrolment talks and cultural field trips – costs 50,000 yuan (US$7,500).

Liu said one of the main draws of the tours was that they were led by Chinese students who were top scorers in China’s national college entrance exam and enrolled at the universities.

He said the students on the trips could relate to the tour leaders and be inspired by them because they were close in age.
For a very small cost, the children learn whether studying overseas is suitable for them and what kind of universities they prefer, Liu said. They return with greater confidence and are more motivated to focus on their studies.

Joe Chiu, country manager of the EF Education First International Language Centre China, said the firm’s short-term overseas courses for teenagers had been growing at a double-digit rate in recent years and expected enrolment to double in the next couple of years.

The US and Britain attracted most student tourists in summer vacations, in line with the fact that these two countries were the top destinations for Chinese students to study abroad, Chiu said. Other popular countries for study tours included Australia, Canada and Singapore.

A 21-day tour to Boston and New York that included visiting Harvard University and meeting students attending the college, cost around US$7,000 to US$8,000 per person, the manager said. The package was targeted at Chinese pupils aged between 10 and 14.

There is an increasing demand for overseas study tours, Chiu said. Our company started enrolling members for this summer’s overseas tour groups last September. We received so many applicants that openings for many popular packages had been snapped up by February.

But the sheer number of tourists converging on these university towns can not only affect the visitors’ experience but also the residents’ way of life.

A councillor in Oxford took to Twitter this month to describe the area as “tourist hell” in the summer. And in March, a Cambridge University college shut to the public for the first time in its 700-year history after campus staff complained of busloads of tourists, mostly Chinese and Japanese, turning up unannounced and trespassing into students’ bedrooms, The Daily Telegraph reported.

Beijing resident Wang Zhao saw the scale of interest first-hand on his recent trip to Oxford with his five-year-old son.
Visiting the campus was like being in a big Chinese student tour, he said. I saw our countrymen’s faces everywhere and Chinese was being spoken all the time.

Shanghai resident Nancy Zhao took her 10-year-old son Johnny Yang on a tour of Harvard University in July but her son did not seem to share her enthusiasm for the institution.

But to be honest, my son looked unimpressed with the campus. To him, Harvard is just a top world university. That’s all, Zhao said.
Personally, I’m intrigued with the campus. I liked its houses, which are historical and different from modern buildings in Chinese universities.

She said it was a shame they did not get to visit the nearby Massachusetts Institute of Technology, another top US university. The school had refused entry to all tour groups, she was told.

My husband hopes our son can become a science and technology major. MIT is the best in this regard. So we really hoped Johnny could have a look around this university, she said.

I believe the trips to these top schools will be embedded in my son’s memories and will inspire him to study hard when he grows older she further said.