KENYA: Kenya Airways Has Shortage Of 40 Pilots, Cost Of Training Is Not Affordable For Many Kenyans 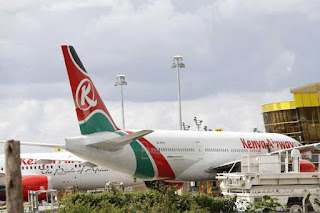 Flying schools in the country are largely empty because of high fees even as Kenya faces a shortage of commercial aircraft operators to meet demand.

Kenya Civil Aviation Authority (KCAA), says the country currently has 11,000 pilots but only 9,000 have commercial licences to fly aircraft.

Training of pilots is very expensive and that is the reason why there are not enough pilots in the country, said Mr Kibe.

There are 19 training institutions for pilots that have been licensed by the agency but they are hardly getting enough students as only 100 young people show up every year.

For one-and-a- half year training, Mr Kibe says the institutions charge up to Sh3 million, which is way beyond the reach of many talented but needy students.

Over the years we have realised that there are talented students out there who want to study aviation, however, their dreams are hindered by the cost of training, he said.

Mr Kibe emphasized that the authority is coming up with a proposal to the government, which if accepted, will introduce a levy that will be used to meet the fees for needy students.

Kenya Airways has moved a step closer to operating direct flights to the United States after the Department of Transportation (DoT) granted it the first set of licences.

Kenya Aiways has received an exemption authority from the DoT, allowing it to commence flights to the US provided it secures clearance from the Federal Aviation Administration (FAA) and other applicable State agencies.

The DoT has also tentatively granted Kenya Airways a Foreign Air Carrier Permit (FACP), which is again subject to clearance from several US security, aviation and border agencies.