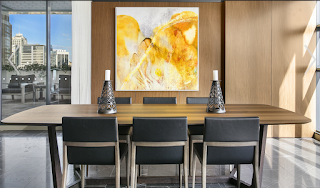 A Chinese internet sensation who became one of the country’s youngest billionaires is selling her three-story penthouse in Sydney for A$18 million (US$13.565 million).

Zetian Zhang, 24, found sudden celebrity status as the “Milk Tea Sister” after an image of her in high school holding a tea drink went viral.

She went on to marry one of China’s richest men, Qiangdong “Richard” Liu, the founder of Chinese e-commerce behemoth, JD.com. Forbes estimates Mr. Liu is worth US$10.1 billion.

Ms. Zhang bought the house four-bedroom apartment at the Stamford Residences in The Rocks, a historic district at the center Sydney, for A$16.2 million (US$12.21 million) in April 2015, according to listing agent Michael Lowdon, the director of Ray White Residential in Sydney’s business district.

The home is on the 28th floor and offers views over the city’s Harbour Bridge and Sydney Harbour.

It is located in the heart of the historic Rocks precinct and is ideally placed to benefit from what I can describe as an axis of sheer opulence, Mr. Lowdon said.

This apartment will have an outstanding view across to Barangaroo and the forthcoming Crown Casino.

The home, completed five years ago, spans nearly 598 square meters (6,437 square feet), and has both formal and informal living spaces, a separate media room and its own elevator, according to the listing.

Images of the interior show Ms. Zhang decorated the home with midcentury modern and contemporary design elements, such as deep-set leather couches and colorful, abstract art to offset an otherwise neutral color palette.

The Stamford also spoils residents with a laundry list of luxury amenities, such as a 24-hour concierge, pool, gym and rooftop terrace with a barbecue, according to the listing.

An iconic property in such an iconic location in the heart of The Rocks will surely attract worldwide attention, he said.