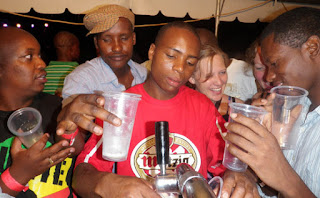 The country’s lifestyle culture is improving and one of the events making its mark is the Mutzig Beer Fest. The festival makes a comeback this year.

This year’s edition will take place on September 2, at Golden Tulip Hotel in Nyamata.

“We were overwhelmed by the number of people who turned up for the event, but it also challenged us to prepare better,” said Patricia Garuka, Bralirwa Ltd’s brand manager, the organiser’s of the event.

The organiser’s are shifting the focus of the event from music and live performances to the core aim of the festival, which is celebrating the Mutzig Beer brand.
“We want those who attend to enjoy the many different activities of the beer festival,” said Ms Garuka.

Previous years have seen continental and international artistes take centre-stage at the event, but this will change this year. The organiser’s want to only feature local and regional musicians.

“We received a lot of inquiries about why we haven’t given local musicians more space to perform,” said Mrs Garuka.

Some of the challenges encountered last year included lighting and poor sound, which the organisers say they have now resolved.

Previous editions offered free public transport to those attending but this will not be the case this year. Mrs Garuka said Bralirwa is in talks with public transporters to provide buses to transport people to and from the venue.

Other activites that will feature at the festival will include cocktail and food stalls, art exhibitions and face painting.

The fifth edition of the Bralirwa beer festival was a huge success in spite of the rainy weather.

At first only a few fans had turned up for the event, partly because of the heavy rain, accompanied by strong winds. However more fans showed up and by 7pm both tents were full of beer lovers.

The festival did not disappoint and lived up to its billing as a great concert.

Musicians performed well and there was lots of beer and food for the hundreds who turned up to have a good time.

The October 20 event, held at the Expo Ground’s gates at Gikondo, was an amazing one for music and beer lovers. Both local and imported alcoholic drinks were available.

The stage was set up well with good sound equipment and musical instruments to enable the performers to entertain the crowd.

Well known DJ Bisoso entertained the crowd with party hits, local and regional music. The performances were projected onto a big screen.

Kigali’s popular MCs and radio presenters Ginty and Remy were on hand to ensure the crowd were having a great time. The two were later joined by MC Tino.

To ensure the crowd had enough energy for the concert the organisers set two coupons for food as an entry requirement.

Buses were made available to take people home for free.

Urban Boys who recently released their song Take it off, which they produced together with Jackie from Uganda, performed live for the crowd.

Urban Boys performed their songs Sintuza, Kunda Ifaranga and Bibaye, among others. They were joined on stage by Congolese dancers to perform tracks such as Kipepewo of Chameleon, Inkoramutima of Meddy and many more.

Dj Bisoso then entertained the crowd with a couple of Lucky Dube tracks. The organisers decided that all the artistes would have to perform live.

Orchestre Impala have over 35 years’ experience in music. They performed for about an hour and a half. Music legend Jean Paul Samputu also performed at the event.

There were other bands performing on stage and at around 11pm, came nonstop music by Bisoso with music lovers dancing tunes on Bralirwa’s red carpet.

The music was stopped at midnight sharp as announced but the audience could not realise it and instead started shouting for more time and more beers. “Bralirwa we want more music and more beers please…”

This year’s Beer Fest was exclusive as compared to the previous ones.