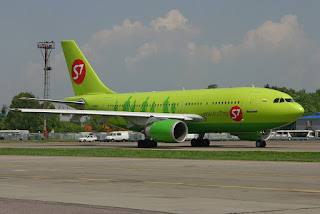 S7 Airlines, a oneworld®global airline alliance member, announces that it now has the first Airbus A320neo airliner. Today, the plane has been transferred to the airline at the manufacturer’s factory in Toulouse.

S7 Airlines has become the first Russian airline with the modern Airbus A320neo family aircraft in its air fleet. The airliner was obtained on lease from the leasing company BOC Aviation Limited.

“S7 Airlines is constantly updating its air fleet. We employ the latest developments of the world’s leading manufacturers. Airbus A320neo aircraft are more efficient in operation, their fuel consumption is reduced by 15% and the flight range is longer than that of the previous generation.

Soon the passengers of S7 Airlines will be the first in Russia to feel the new level of comfort offered by these modern aircraft. The aircraft of the new family will gradually replace all of the Airbus A320 in the air fleet,” says Vladislav Filev, Chairman of the Board of Directors of S7 Airlines.

“We congratulate our long-standing partner, the S7 Airlines, on receiving the first A320neo aircraft in Russia. We are sure that the airline will appreciate the high fuel efficiency of this model, as well as the advantages of its unification with the existing A320 air fleet.

We hope that the aircraft of the A320neo family will become the backbone of the airline fleet in the future,” notes John Leahy, Commerce Director of Airbus Commercial Aircraft.

The S7 Airlines aircraft is equipped with the latest Pratt & Whitney Pure Power PW1100G-JM engines and Sharklets wing tips made of composite materials, which improve the aerodynamic characteristics of the aircraft.

Airbus A320neo is the quietest aircraft among the airliners of its class. The level of external noise is 19 dB lower than the ICAO requirements (Chapter 4), and the area of the sound wake when taking off is 50% smaller than that of the aircraft of the previous generation.

The aircraft cabin is the widest among its competitors, it has improved sound insulation, the most capacious overhead bins and more space under the armchairs to accommodate cabin baggage. The interior design of the new aircraft was developed by PriestmanGoode, which based its solutions on light and modern updated corporate identity of S7 Airlines.

The new S7 Airlines airliner is designed to carry 8 business class passengers and 156 economy class passengers. The modern armchairs are equipped with sockets with a USB-connector, as well as with mobile devices holders. A small three-stage stand, located at eye level, allows you to fix a tablet or a smartphone on the back of the chair in front of you.

Airbus specialists upgraded the panels over passenger seats. They are more convenient to use and equipped with LED reading lamps, the light of which is more comfortable for the eyes.

The improved air conditioning system, developed by the manufacturer, guarantees fresh air and its even distribution in the cabin of the aircraft, allowing to completely recirculate the air every two minutes.

The airliner wears the renewed livery of S7 Airlines, developed by the British agency Landor. The new livery is an integral part of the updated, more concise corporate identity of S7 Airlines, which follows the latest trends in graphic design. The primary brand colour is still a bright shade of green, emphasising the unique, progressive and modern character of the airline.

Air tickets can be purchased at s7.ru, through the iPhone app or the Android app, and at any S7 sales office. You can also learn accurate flight information, book and buy tickets by calling our Contact Centre at 8 800 700-0707 (free for Russia).

The airline has a wide internal route network, created on the basis of air transport hubs in Moscow (Domodedovo) and Novosibirsk (Tolmachevo). S7 Airlines also performs regular flights to countries of the Commonwealth of Independent States (CIS), Europe, the Near East, Southeast Asia and countries of the Asia-Pacific region.

In 2007 the company received an official IATA certificate as an IOSA (IATA Operational Safety Audit) operator, becoming the second air carrier in Russia to have successfully passed the full international audit procedure for compliance with operational safety standards.

S7 Airlines is one of the most reliable airlines of Russia, it implements latest achievements of the world's industry in passenger services and develops its own services dynamically.

Today S7 Airlines has the newest and one of the most modern aircraft fleets on the Russian air transportation market. All flights of the airline are performed by the aircraft of the world’s leading manufacturers.

S7 Airlines is in top 100 of the best airlines of the world and ranks third in the Eastern Europe, as indicated by the authoritative international rating Skytrax.

S7 Airlines was a multiple winner of the Wings of Russia National Aviation Awards in different categories.

S7 Airlines was a multiple winner of the Cannes Lions advertising festival awards for implemented projects, and My Planet National Awards for discoveries in travel sphere.

The airline is a member of the S7 Group of companies. In 2016 Group member airlines carried more than 13.1 million passengers.