JAPAN: Trader Overcharges Chinese Tourists To Punish Them For Their "Terrible Manners" 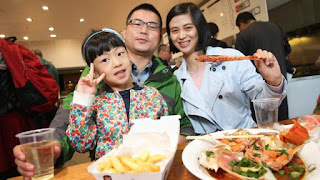 A man who has not been named owns the store on Miyakojima island and posted a sign saying that parasols would be 20,000 yen (HK$1,414) for Chinese people, while the fee for everyone else would be a mere 2,000 yen.

The operator of a beach equipment store in Okinawa Prefecture has backtracked on a policy of charging Chinese tourists 10 times the price to rent items after becoming the target of an online campaign.

The owner said he had operated the store for 14 years but only recently put the sign up after becoming tired of dealing with Chinese visitors.

I have tolerated them for years but as I don’t want to rent to them now I decided to charge them 10 times as much.

Asked whether his actions were not discriminatory, the man replied, I have experienced a case in which five Chinese tourists sat on a chair meant for one person and broke it.

I don’t want to rent to them simply because I do not want any more broken chairs, he said.

It is not discrimination he said.

Those explanations have not washed with online commentators, with one contributor saying the man’s actions are the definition of discrimination.

You’re attributing problems with individuals to the group instead of the people who broke it, the poster said. You might as well attribute it to all Asians or to all men or to people with families. But no, you went straight to nationality.

Another commented: Xenophobic racism. There is no excuse for this.

The online criticism appears to have worked, however, as the owner of the store told local media that he was no longer asking Chinese to pay more.