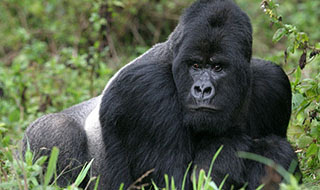 Silverback (Male Mountain Gorilla)
Mgahinga is home to the habituated Nyakagezi gorilla group - a fairly nomadic bunch that has been known to cross the border into Rwanda and the Congo.

The family includes the lead silverback Bugingo who is around 50 years old and father to most of the group; his silverback sons, Mark and Marfia; and two blackbacks, Rukundo and Ndungutse, who love to pose and play in the trees.

The mountain gorilla (Gorilla beringei beringei) is one of the two subspecies of the eastern gorilla. There are two populations.

One is found in the Virunga volcanic mountains of Central Africa, within three National Parks: Mgahinga, in south-west Uganda Volcanoes, in north-west Rwanda; and Virunga in the eastern Democratic Republic of Congo (DRC).

The other is found in Uganda's Bwindi Impenetrable National Park. Some primatologists consider the Bwindi population in Uganda may be a separate subspecies though no description has been finished. As of November 2012, the estimated total number of mountain gorillas is around 880.

Historically Mountain gorillas are descendants of ancestral monkeys and apes found in Africa and Arabia during the start of the Oligocene epoch (34-24 million years ago). The fossil record provides evidence of the hominoid primates (apes) found in east Africa about 18–22 million years ago.

The fossil record of the area where mountain gorillas live is particularly poor and so its evolutionary history is not clear It was about 9 million years ago that the group of primates that were to evolve into gorillas split from their common ancestor with humans and chimps; this is when the genus Gorilla emerged.

It is not certain what this early relative of the gorilla was, but it is traced back to the early ape Proconsul africanus. Mountain gorillas have been isolated from eastern lowland gorillas for about 400,000 years and these two taxa separated from their western counterparts approximately 2 million years ago .

There has been considerable and as yet unresolved debate over the classification of mountain gorillas. The genus was first referenced as Troglodytes in 1847, but renamed to Gorilla in 1852.

In 2003 after a review they were divided into two species (Gorilla gorilla and Gorilla beringei) by The World Conservation Union (IUCN).

Physically the fur of the mountain gorilla is often thicker and longer than of other gorilla species, enables them to live in colder temperatures.

The gorilla is massive, with a short, thick trunk and broad chest and shoulders. Its eyes and ears are dwarfed by its large head and hairless, shiny black muzzle.

Older males develop a crown of muscle and hair that makes the head look even longer. The arms are longer than the stubby legs. The fully adult male mountain gorilla is twice as large as the female.

Adult males are called silverbacks because a saddle of gray or silver-colored hair develops on their backs with age. The hair on their backs is shorter than on most other body parts, and their arm hair is especially long. Fully erect, males reach 1.9 m (6 ft. 3 in) in height, with an arm span of 2.3 m (7 ft. 7 in) and weigh 220 kg

Most are found on the slopes of three of the dormant volcanoes: Karisimbi, Mikeno, and Visoke. The vegetation is very dense at the bottom of the mountains, becoming sparser at higher elevations, and the forests where the mountain gorilla lives are often cloudy, misty and cold.

The mountain gorilla is primarily an herbivore; the majority of its diet is composed of the leaves, shoots and stems (85.8%) of 142 plant species.

The mountain gorilla is highly social and lives in relatively stable, cohesive groups held together by long-term bonds between adult males and females. Relationships among females are relatively weak.

These groups are nonterritorial; the silverback generally defends his group rather than his territory. In the Virunga mountain gorillas, the average length of tenure for a dominant silverback is 4.7 years .61% of groups are composed of one adult male and a number of females and 36% contain more than one adult male.

The remaining gorillas are either lone males or exclusively male groups, usually made up of one mature male and a few younger males Group sizes vary from five to thirty, with an average of ten individuals.


The gorilla is shy and retiring rather than ferocious and treacherous. It usually seeks no trouble unless harassed but will valiantly defend its family group if threatened. Family groups are close-knit and may have up to 30 members, but even if smaller, the group usually consists of at least one older male, one or more females and a few juveniles.

Gorillas have strong attachments to members of their own group and even when groups meet and mingle and then subsequently part, each animal tends to remain with its respective unit.

An adult male called a silverback named for the silvery gray hairs on its back normally leads each group, serving as its chief protector and defender. Gorillas continually wander through their home ranges of 10 to 15 square miles, feeding and resting throughout the day.

Because gorillas are nomadic, they build new nests each day at dusk, constructing them of bent branches in a tree or of grasses on the ground.

A group's hierarchy, ritualized behavior and bluff charges between males prevent conflict among and between groups.

Gorillas scream, grab foliage and stuff it in their mouths, stand erect on their hind legs, tear up and throw plants, drum on the chest with hands or fists, stamp their feet, strike the ground with the palms of their hands and gallop in a mock attack on all fours.

Mountain gorillas have a slow rate of reproduction. Females give birth for the first time at about age 10 and will have more offspring every three or four years.

A male begins to breed between 12 and 15 years, when he is in charge of his own group. Able to conceive for only about three days each month, the female produces a single young.

Newborn gorillas are weak and tiny, weighing in at about 4 pounds. Their movements are as awkward as those of human infants, but their development is roughly twice as fast.

At 3 or 4 months, the gorilla infant can sit upright and can stand with support soon after. It suckles regularly for about a year and is gradually weaned at about 31/2 years, when it becomes more independent.

Though strong and powerful, gorillas are generally gentle and shy. Severe is rare in stable groups, but when two mountain gorilla groups meet, the two silverbacks can sometimes engage in a fight to death, using their canines to cause deep, gaping injuries.