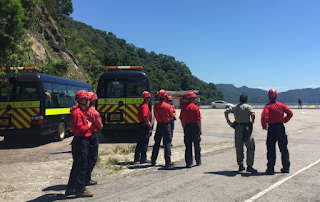 The body of a hiker who went missing nearly a week ago has been recovered by rescue workers in Plover Cove Country Park.

Chan Wing-wah, a Census and Statistics Department employee, disappeared during a solo hike in the country park in Tai Po on August 20.

His body was found on Saturday afternoon after an exhaustive land and air search stretching over several days.

Almost two dozen firefighters, search and rescue workers were deployed to Plover Cove Reservoir with the assistance of two helicopters.

Conditions for the search were challenging as temperatures soared above 30 degrees Celsius.

The search first resumed on Thursday after being suspended by Typhoon Hato on Wednesday.

Plover Cove Country Park, next to the Pat Sin Leng mountain range, is a popular spot for hikers, picnic goers, cyclists and drivers for its scenic surroundings and reservoirs.

However, the area is also notorious for accidents for hikers and drivers.

Two days ago, the decomposed body of Lee Wui-chau, 66, a dementia sufferer, was discovered at a stream near the Hok Tau Reservoir in Pat Sin Leng Country Park after he left his Tai Po home.

An investigation into the death is still underway.