Barcelona, Venice Have Uncontrolled Floods Of Tourists, Others Have Nothing 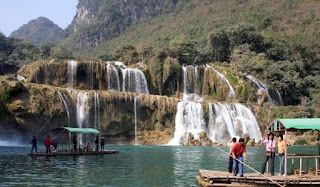 It was also the seventh consecutive year of sustained growth following the 2009 global economic and financial crisis. And, 300 million more international tourists travelled the world last year as compared to the pre-crisis record in 2008.

Tourism has shown extraordinary strength and resilience in recent years, despite many challenges, particularly those related to safety and security. Yet, international travel continues to grow strongly and contribute to job creation and the wellbeing of communities around the world, said UNWTO Secretary-General Taleb Rifai.

Indeed, tourism has been one of the fastest growing industries worldwide in the past couple of years. The tragic incident in Barcelona recently when 13 people were mowed down and more than a hundred injured by a rampaging vehicle in the popular Las Ramblas area also in a way demonstrates the diversity of the nationals who go on holidays as the list of the countries affected show.

Have you been jostled by hordes of visitors while trying to get a better view of the artefacts in the beautiful Hermitage Museum in St. Petersburg? Have you been to Venice recently and smelled the rotting water?

Or think of the hill stations in India now, most of which are wilting under the pressure of thousands of feet with people enjoying the ‘summer holiday’ with nary a thought before throwing an ice-cream cone or a plastic bag on the sidewalk.

But there has been a downside too to burgeoning sector. Unbridled tourism has created tension among local residents in some of the most popular destinations in the world in the recent past. And they have been striking back with anti-tourism protests. In Spain, for example, which saw a some 75.6 million tourists in 2016.

In Barcelona, protest group Arran, the youth wing of the radical CUP (Popular Unity Candidacy) have been vehemently opposing cheap- to- rent houses alleging they spoil the neighbourhoods and the environment alike.

The Venetians too have been demonstrating against unrestrained tourism in the last few months. The romantic city on the Italian lagoon sees more than 20 million visitors a year. Add to it the huge cruise ships anchoring to let hundreds of leisure travelers a day to explore the city. The local populace is only 55,000 in number.

No wonder, tired of losing their neighbourhood ambience , some even pushed to the fringe of the city by aggressive real estate developers, more than two thousand locals recently marched through the city putting their feet down and demanding that the mayor and local government take action and they can get their city back.

Popular destinations in India too have seen deterioration to local environment with increasing foot fall. With an expanding middle class and more disposable income in hand, domestic tourism has seen a surge in the last few years.

As a result, local residents, be it in Darjeeling, Shimla or Mussoorie, mourn the loss of their habitat and point out that irresponsible tourists spoil the very ambience of the hills stations where they rush in to escape the summer heat.

Rifai in an interview to media on the subject said that the people wanting to travel is not at fault, which is natural; rather the need of the day is the manage growth in a sustainable manner which the local authorities need to look into. Among measures UNWTO recommends to achieve it is taking into account the needs of the local community.

Striking a balance between the number of visitors who bring in revenue to the local market and make it sustainable is a tightrope walk, no doubt. But economists and environmentalists say that with policies with a long term view and concerted efforts by local authorities can manage to do so in a better way.

Bhutan, the kingdom at the Himalayan foothills, is often showcased as an example of this point of view. The country’s long-term strategy of controlled tourism with a focus on sustainability and quality has earned it praise worldwide. In the process, it has also been able to retain the pristine beauty of the land and its cultural ethos.

The happiest country in the world, according to a survey measured on its Gross National Happiness, introduced a framework for the development of tourism in 1974. With a high-value, low-volume focus its aim was to control the type and quantity of tourism right from the beginning. Even UNWTO recognised this step as commendable.

Of course, it has also meant that Bhutan remains a rather expensive destination for the average tourist. But then, uncontrolled tourism would have destroyed the very character of this tiny kingdom. One has to make a choice.

Meanwhile, the mayor’s office in Venice plans to introduce a ban on new tourist accommodation by this summer end. In addition, there would be monitoring agencies to check overcrowding and pinpoint areas that see high concentration of visitors.

Rome recently announced a ban on eating near its numerous beautiful fountains or paddling in the water. Milan too has taken steps to preserve its old quarters from getting spoiled by insensitive tourism.